At the London Business School (LBS) Senior Executive Program (SEP) last year, a senior executive from Adidas happened to remark at dinner one night that Frank Sinatra’s song “New York, New York” was used in German restaurants to signal to patrons it was time to leave. The things you learn in school!

She (yes, the Adidas senior exec was a she! why are you surprised?) wasn’t to know that Sinatra’s “New York, New York” was the piece of music I’d chosen for the LBS playlist. It was the song I’d selected that “had special meaning for me – that transported me back to a precise moment in my life, that captured an important, unforgettable time or turning point.”

Whenever I hear it I am instantly transported back to an incredible party in March 1991 in Mudgeeraba on the Gold Coast hinterland in Queensland. The venue was a beautiful white Queenslander property on acreage, the home of two friends/colleagues from Bond University. After graduating with a DPhil from Oxford in 1990, I’d accepted a postdoctoral position at Bond University Science and Technology School (SciTech). In June 1990, some 9 months before the party, I’d arrived on the Gold Coast from the UK and had spent my first few nights at that very same house (along with my dad who had driven me the ~1000 miles from Melbourne) while I sorted out my own long-term accommodation.

The party was fancy dress and New-York-themed. I was Madonna (well, “Vogue” was in vogue at the time). The head of SciTech was there as Crocodile Dundee. King Kong also made an appearance.

Even my mum was there, visiting from Melbourne with 2 other family members.

The occasion was a very memorable farewell. Mine. A few days later I would be flying out of Australia to take up a 2-year postdoctoral position at Rockefeller University, York Ave, New York, New York. Before I had completed one year of a three-year contract at Bond University, I would be swapping my subtropical home on the Gold Coast for a studio apartment on the 17th floor of a high-rise on 63rd and York.

As I explained in a previous post, Bond University announced the closure of SciTech in Nov 1990, just 5 months after I arrived. Dozens of people were summarily sacked, including me. PhD students part-way through their research studies were without a supervisor, a lab or a stipend. It was a very traumatic experience. 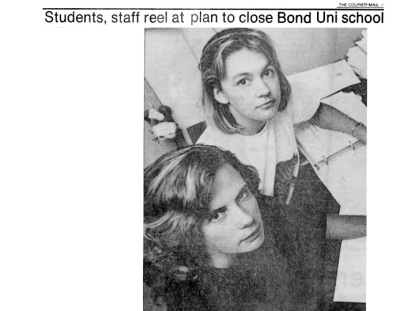 Two young women, myself (top) and PhD student Anneliese Palmer, 24 hours and a sleepless night after they’d been told their careers were about to be severely disrupted. I hadn’t even washed my hair by the looks of it. From The Brisbane Courier Mail, Wed 7th November 1990

For me, and perhaps for others, the New York party was a very welcome pressure release, after months of uncertainty and drama. It was a chance to have some fun, and to take control of life again, to set a new course after the turmoil and angst of the previous few months.

Not surprisingly, the grand finale of the party was that song, Frank Sinatra’s “New York, New York”. When it came on, the volume control was turned up to 11, the speakers blared, and the whole School – together with family and friends – sang in unison: “Start spreading the news…”

(in case you need a little reminder….)

So that was the song I had chosen for the LBS soundtrack.

I had selected it because it marked a key moment in time for me. A moment of stark clarity. A point in my life where threat turned into opportunity – an opportunity that changed the course of my career. I would leave Australia, move to New York, work in a fabulous lab, and generate new knowledge that would lead to a first author paper in a highly prestigious journal. That work would lay the foundation for research that I continue to this day.

Not that I knew any of that at the time. All I knew then, was that I was taking a big risk, and traveling half-way round the world again to re-start my post-doctoral career.

Perhaps unconsciously, I had also chosen that song last year for LBS because – as my Adidas colleague so neatly explained – it’s the song that signals it’s time to leave.

In March 1991, I hadn’t particularly wanted to leave Bond Uni, the Gold Coast, or my colleagues, friends, and family in Australia. And in October 2015, when I selected that song at the start of the SEP course, I didn’t particularly want to leave UQ either. But by the end of SEP, it had become clear that, well, it was time to think about leaving.

Through informal discussions with SEP colleagues, through the SEP personal development coaching group, through the SEP business development coaching group, and through understanding myself and my motivations and values better, it was obvious. It was time to take another risk and find a new challenge. So it was in March 2016, almost 25 years to the day after that famous party, I started a new phase in my career.