I didn’t expect the death of former Australian Prime Minister Gough Whitlam to affect me so deeply. Perhaps I was already feeling fragile after the passing of my father, and then my father-in-law, in the past few weeks. But they were both family. Whitlam was not. And he was, after all, 98 years old. It’s not like his life was cut short; this was no tragic, untimely end.

Maybe it’s because he led Australia during a time when I first became aware of politics. But I think probably the reason I am so saddened by his passing is because his reform agenda impacted on me directly; it literally changed the course of my life. Elected in the early 1970s after decades “in the wilderness”, Whitlam’s Labor Government had a whirlwind three years in power, pushing through reforms that shaped our nation: universal health care, abolition of conscription – including releasing draft dodgers from prison – lowering the voting age to 18, implementing the racial discrimination act, no-fault divorce, the Family Law court, free tertiary education, paid maternity leave for women in the public service, and connecting outer urban areas to the sewerage system. He also established a Department of Aboriginal Affairs, and appointed the first Prime Ministerial adviser on women. 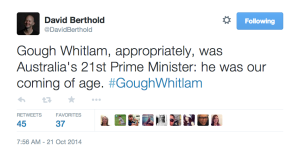 As David Berthold noted on twitter “Gough Whitlam, appropriately, was Australia’s 21st Prime Minister: he was our coming of age.”

“Only those born bereft truly know the power of opportunity” Aboriginal lawyer Noel Pearson said at Whitlam’s memorial service in Sydney this week. Maybe not bereft, I was certainly born poor, and I truly know the power that Whitlam’s vision gave me. It gave me access to an education. The family I was born into had never had anyone attend university. Indeed, neither of my parents finished high school. Tertiary education was beyond reach until Whitlam’s reforms. Born at just the right time to benefit, I took the opportunity and ran with it. I aced the Pharmacy degree in Melbourne, winning many undergraduate prizes, and that set me up for a Masters research degree in Melbourne, and then a DPhil at Oxford and a postdoctoral position at Rockefeller University in New York. My scientific research career has taken me around the world. As I write this post I am in a hotel in Tokyo, on a 2-week visit to build connections with Japanese researchers. Whitlam’s education legacy gave me the springboard to build a career and then to have a voice in my field of molecular research and in science gender equity policy in Australia.

What would my life have been without the opportunity the Whitlam Government gave me? I cannot imagine. I dare not imagine.

Thank you Gough for your vision of a fairer Australia. Thank you for giving me and millions of others equality and opportunity. Thank you for liberating my talents and uplifting my horizons.

I cherish your values. I celebrate your life. I mourn your passing.

4 thoughts on “thank you Gough”